Should new APIs created in 2018 be RESTful or be built using graphql or be something else entirely?

While pondering and researching this question, I’ve stumbled upon some broader realizations like,

I thought these realizations were pretty interesting and worth sharing. Here I go.

I’m not going to give a complete definition of REST here, but one thing that most so-called RESTful APIs are missing is “hypermedia.” It turns out that Roy Fielding, the creator of REST, has actually explicitly complained about this:

What needs to be done to make the REST architectural style clear on the notion that hypertext is a constraint? In other words, if the engine of application state (and hence the API) is not being driven by hypertext, then it cannot be RESTful and cannot be a REST API. Period. Is there some broken manual somewhere that needs to be fixed?1

That was written in 2008, but Leonard Richardson et. al. basically have said they same thing in their excellent 2013 book RESTful Web APIs,2 and reflecting on my experience of consuming “RESTful APIs” and the REST constraint of “hypermedia as the engine of application state,” (HATEOS) it seems like Fielding’s complaint is just as valid today as it was 8 years ago.

Let me lift Richardson et. al.’s explanation of the HATEOS constraint out of their book, just so you can do a mental check yourself to see if you’ve ever worked with a RESTful API:

Looking at each point here, my checklist on typical projects looks like this:

Fielding and his REST folks aren’t being pedantic in pointing out that we’re missing hypermedia in our “REST” APIs. Richardson et. al. actually call hypermedia “the single most important aspect of REST,"4 and they make a pretty compelling case that hypermedia matters.

Richardson et. al. give us a nice example of why hypermedia and standards matter by spending quite a bit of time spelling out how we could save a lot of code and time on the server and on the client if we stopped inventing fiat standards for how collections work in our APIs. What if all JSON payloads for all APIs that wanted to talk about collections of resources had some the same way of telling clients:

There are a bunch of standards that try to add hypermedia to collections. Here’s one called “collection+json” (modified from the original example) just so you can get an idea:

Here’s how a payload like this would enable standard client state transitions:

Why the half-ass adoption of REST and why graphql? 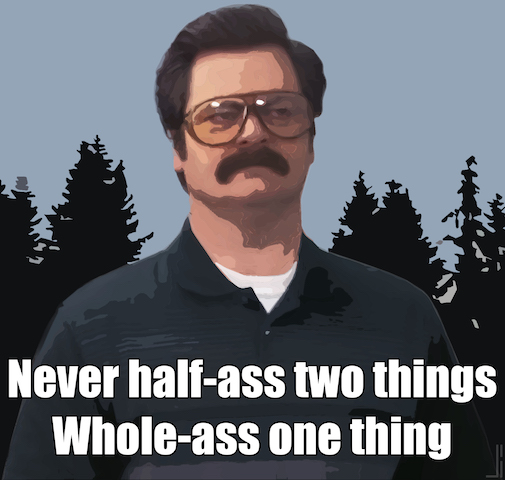 Anyway, with all of the lip service being paid to the RESTful web, how is it that we find ourselves in a situation where most of our services aren’t RESTful and we’re reinventing the wheel? Why has our adoption of REST been mostly6 half-assed?

The relevant force here is “crappy internet."7 Even with the improvements brought on by SPDY and HTTP 2,8 crappy internet — especially on phones — makes it hard to create software that

The “feels fast” constraint drives the push towards SPAs. With SPA’s, the whole point is to avoid talking to server for every application state transition, which runs directly counter to REST. This makes the idea of hypermedia in particular an anathema. Hypermedia gives the client the resource and application state transitions it can make “just in time.” It turns out that REST’s “just in time” delivery of hypermedia controls takes too damn long.

This wouldn’t be so bad if it weren’t for the “limited connectivity” issue. Hypermedia increases the size of resource representations. The above collection+json friends collection payload could look like this:

This is much more compact than the JSON payload with hypermedia controls. If we’re working with spotty connections and limited data, the more compact our messages, the better.

It turns out this same force — crappy internet — is what’s driving adoption of graphql, and if we look specifically at what what people want out of graphql, we’ll find that they’re just making a different trade-off than the one that the pioneers of REST — with eyes wide open — made when it was being formulated.

In his dissertation, Fielding recognizes that RESTful APIs could result in extra calls and more information than is needed for certain clients:

Implementations are decoupled from the services they provide, which encourages independent evolvability. The trade-off though, is that a uniform interface degrades efficiency, since information is transferred in a standardized form rather than one which is specific to an application’s needs. The REST interface is designed to be efficient for large-grain hypermedia data transfer, optimizing for the common case of the Web, but resulting in an interface that is not optimal for other forms of architectural interaction.9

By including a “uniform interface” as a part of REST, Fielding traded client efficiency for independent evolvability.

Because of the issues with the internet connectivity, for some companies, this has actually turned out to be a bad trade-off. If you look at why companies are adopting graphql, it looks like the more urgent problem is actually client efficiency.

Both facebook and github — probably the two biggest adopters of graphql — mention how important it is that their clients can ask for many resources in one request and they talk about how useful it is for their clients to get exactly what they’ve asked for and nothing more.10

Facebook’s need for client efficiency is so strong that they’ve basically just given up on independent evolvability. In his 2016 GraphQL Summit keynote, Lee Byron noted that facebook just hasn’t made a breaking change to their API in four years.

Even if we decide that in 2018 graphql is often a way of building web APIs, we don’t have to give up on all of the benefits that come along with RESTful APIs. Specifically, we don’t have to give up on the still unrealized benefit of hypermedia: standardized Web API interfaces that enable smarter clients which will save API designers and client programmers design and coding time.

Marc-André Giroux over at Github has already started thinking about this, and has a neat post on how we can include hypermedia-esque info in graphql mutation responses to inform the client which mutation it can perform next. Graphql has a concept of interfaces which can be adopted by the types we define, so there’s no reason why we can’t agree on a standard set of interfaces that have hypermedia controls describing which queries and mutations a client could make at a certain point.

Phil Sturgeon takes the other side on this issue in his “Representing State in REST and GraphQL." He thinks that trying to include hypermedia in a graphql would be “a bit of a mess” because he thinks Graphql was “designed to exclude [hypermedia].” The documentation for graphql doesn’t mention hypermedia at all, and hypermedia isn’t discussed in the couple of Lee Byron introductions to graphql that I’ve watched, so I don’t think graphql is at all intentional about excluding hypermedia.

I think that Graphql — like JSON — can be a vehicle for hypermedia. It just depends on whether we want to start spending the time to invest in standard hypermedia-esque controls that work with Graphql.

Of course, I could be wrong about all this. I haven’t spent much time with graphql, but it definitely looks like in 2018 with our crappy internet issues, its worth looking into. Setting aside crappy internet, the convenience of having an application-specific interface make graphql worth considering.

Both Fielding and Richardson et. al. are trying to support independent evolvability with REST, but it seems perfectly reasonable that we may find ourselves in situations where independent evolvability isn’t the biggest problem we face.11 Having a convenient interface to work with on clients that are probably going to be updated that mitigate issues caused by spotty and slow internet connections with the option of adding hypermedia-esque controls seems like a pretty sweet stop to be in.

As long as there are other big issues aside from extensibility of APIs and the desire for smarter clients, the missing feature of most APIs that would make them truly RESTful (hypermedia) may only live on in a as an optional add on in REST-ish graphql APIs.

Patterns Principles and Tools for Testing Your React (Native) Apps

From Panic Attacks to Yoga Mats: Startups, Leadership, and my first 1000 minutes Meditating