From Panic Attacks to Yoga Mats: Startups, Leadership, and my first 1000 minutes Meditating

About a year and a half ago, I was sitting in my Manhattan studio apartment trying to write an html lexer in python. I was about half way through my batch at the Recurse Center, and I was frustrated with my lack of progress towards my learning goals and intimidated by all of the absurdly smart people around me.

While writing the lexer, I got hung up on an odd piece of python syntax.1 I spent “too long” trying to figure out what was going on with the sample code, and as a result, I felt even more frustrated by my lack of progress. I muttered a few curse words under my breath and then got ready to take another crack at my lexer code.

Then, just as I was thinking about about how to write my code, something happened that’s never happened to me before: My heart started racing; it felt like I was sprinting even though I just sitting in a chair. I felt short of breath and started sweating a bit. Then, after about a minute or so, the symptoms subsided.

☝ That was my first ever panic attack, and it freaked me out because I thought there might be something wrong with my heart. Prior to that panic attack, I’d been having chest pains for months, and I have some family history of heart issues. Fast forward a bunch of doctor’s visits, a hospital visit, and a few more panic attacks, and we found that my worry about my heart was merely another symptom of the anxiety itself. 😌

“I can keep burning the midnight oil and the worst thing that’ll happen to me is a panic attack? Awesome. No problem. I don’t need to listen to people who are telling me I need to learn how to ‘take it easy.’ I’ll just work myself up to the point where it feels like I’m going to freak out. Then I’ll take a break.” 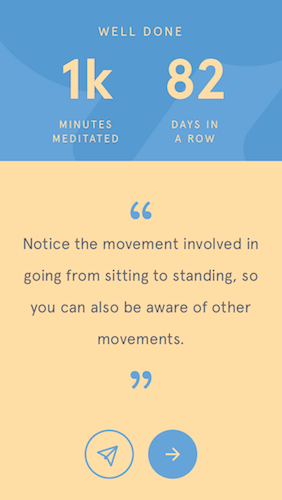 Today, I completed my 1000th minute of meditation, and I know now that — and this probably seems obvious to you — my “work until you’re about to have a panic attack strategy” has some limitations. I’ve moved from panic attacks to yoga mats, and I want to share a bit about the journey.

“Work until you’re about to have a panic attack” might obviously seem like a bad idea, but plenty of folks in silicon valley have said or presumed something like this at one point or another. Scott Galloway, an NYU Business professor and founder of L2, for example, advises:

On a regular basis, at work, demonstrate both your physical and mental strength – your grit. Work an eighty-hour week, be the calm one in face of stress, attack a big problem with sheer brute force and energy…At Morgan Stanley, the analysis pulled all-nighters weekly, and it didn’t kill us, but made us strong. This approach to work, however, as you get older, can in fact kill you. So do it early.2

Paul Graham, the founder of the incubator that’s produced billion dollar companies like Dropbox and AirBnb, basically defines a startup in such a way that working to your limit is essential for working at a startup.

Economically, you can think of a startup as a way to compress your whole working life into a few years. Instead of working at a low intensity for forty years, you work as hard as you possibly can for four.3

He goes on to say that a programmer working at a startup can create 3 million dollars of value per year (as opposed to the standard 80k you create working at a traditional company). To those who balk at the 3 million number, he says,

If $3 million a year seems high, remember that we’re talking about the limit case: the case where you not only have zero leisure time but indeed work so hard that you endanger your health.4

So the idea that startups are so hard that you have to work yourself to the limits of your health is pretty much accepted by lots of smart, experienced entrepreneurs, and partially because of this, I’ve basically accepted that working an a startup is extraordinarily grindy.5

I also think that the need for grinding hard is especially high for folks who want to be leaders at startups. Anecdotally, I’ve noticed that people don’t tend to work harder than their bosses (why should they?), and this intuitive idea is supported by a study or two that I’ve stumbled upon.6 If succeeding at a startup requires extraordinary effort from everyone in the organization and if people don’t work harder than their leaders, then leaders have to live the grind; they have to set the pace. 🏁 🏎️

The move towards “yoga mats” started for me when I noticed that although I wasn’t working myself into having panic attacks, my anxiety and stress was leading to some extra intensity in my interactions at work. Eventually, I became convinced that this intensity made me less effective at leading.7 Here’s a couple of ways this has played out in the past:

I did some research on this and it turns out that stress and anxiety messes with your ability to think clearly and to regulate your emotions much more than I had expected.8 So, by working through the anxiety instead of addressing it, I was trading off some short-term productivity gains for some big losses on how I communicated with people.9

After realizing I was making a bad trade off by not relaxing occasionally, I started trying to be calm by taking Sunday’s off completely. I followed everyone’s standard advice for relaxing: just do something you like doing that isn’t work.10 So, for a while, I mostly played League of Legends to “relax.” 🎮

A few weeks into this, I was playing one Sunday, hands tightly gripped around the mouse and cursing under my breath, and I thought, “Is this actually relaxing? It feels good and it’s fun, but is it actually going to help me be calm when it counts?” This question turned into a quest for how I could — and I get that this is weird quest — relax more efficiently. This is the quest that led me to start considering meditation seriously.

Although I was very skeptical of the effectiveness of meditation, it struck me as a potentially more efficient way of relaxing. Instead of losing my entire Sunday to gaming and other “relaxing” things, I could just set aside 10 minutes per day to meditate. Supposedly, 10 minutes a day is enough to have significant impacts on stress and anxiety levels.11

So, with a healthy dose of skepticism, I decided to give meditation a try for a bit by using the Headspace app, and so far, I think the results have been pretty positive:

In addition to these “in the field benefits,” the experience of meditating is surprisingly and uniquely refreshing. Two things stand out from the experience:

I’ve read a bit about the changes that happen to the brain during meditation, and apparently, there’s a set of regions in the brain called “the default mode network.” 🧠 Judson Brewer, a psychiatrist whose been scientifically studying and practicing meditation for decades, calls this region the “narrative network” of the brain because its the part that is always telling a story about our past, our future, our successes, and our failures.13 This region, according to his research, is less active during meditation and his research lines up exactly with my experience of meditation, which is reassuring because like I said, I approached meditation with a lot of skepticism.