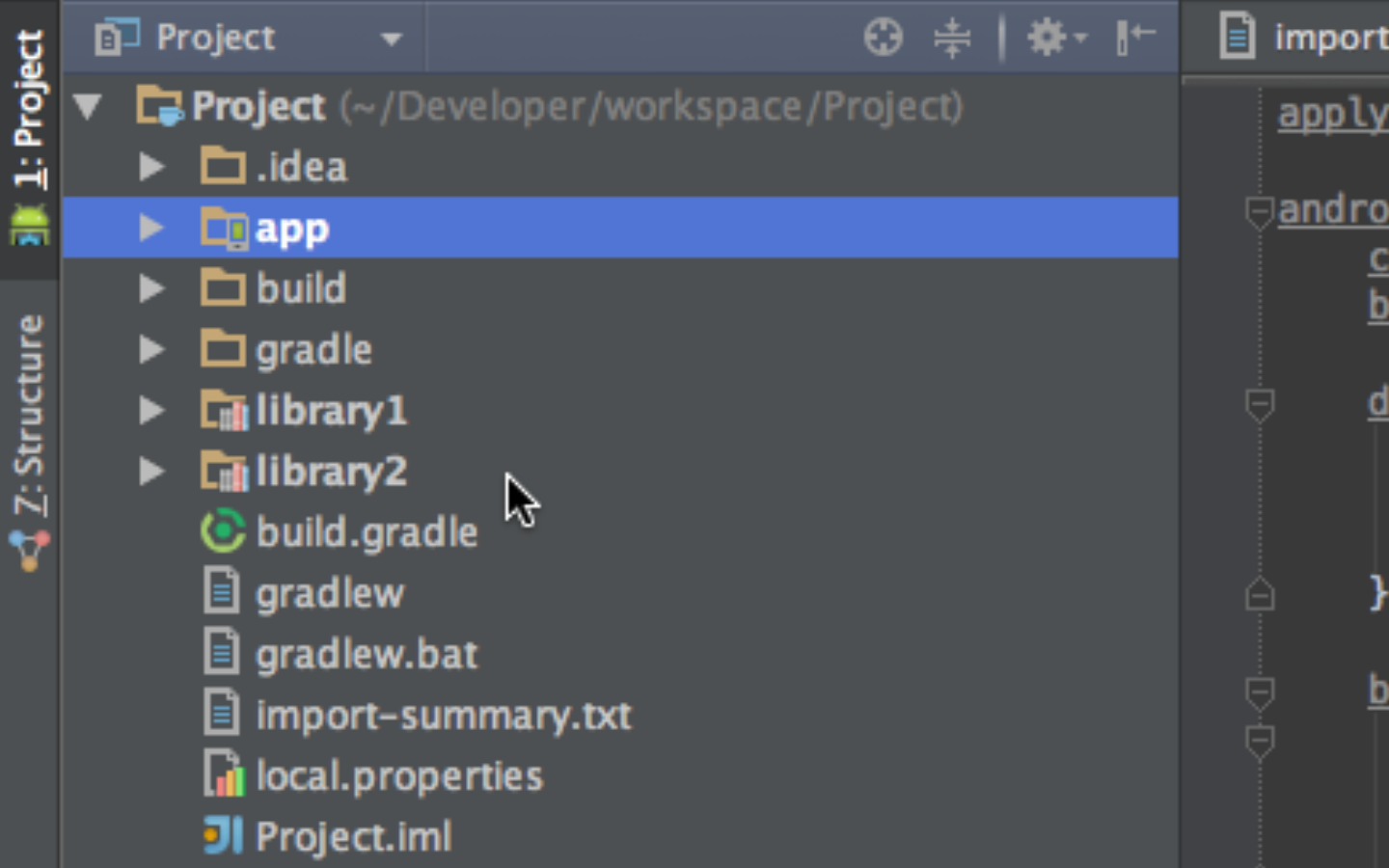 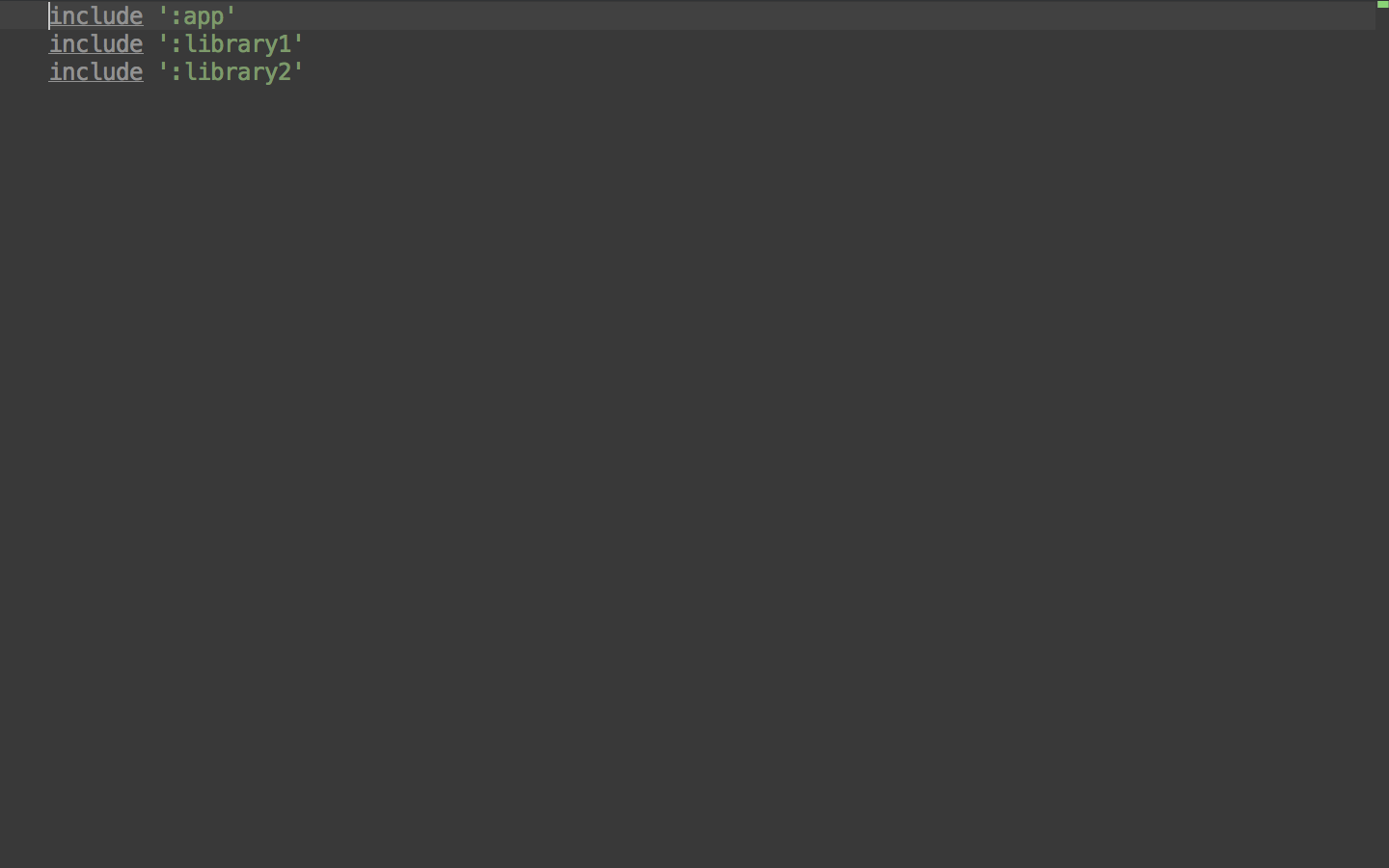 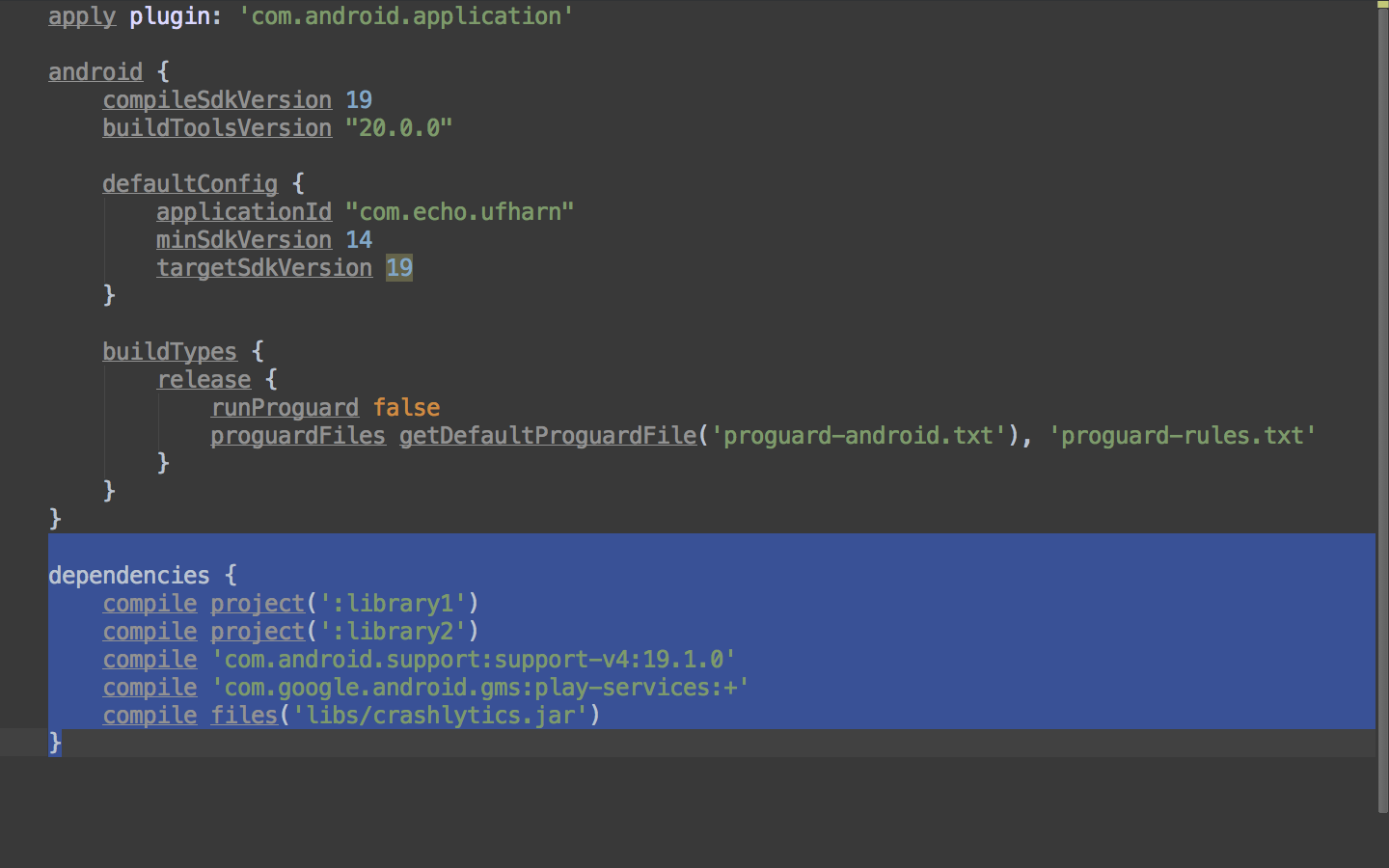 As you can see, Google’s suggested configuration is simple, and its even simpler if you use the Android Studio UI to configure you gradle files for you. In spite of it’s simplicity, there are several reasons why we might want to avoid this configuration. I discuss those reasons in the next section.

Some Unfortunate Features of “The Google Way”

Suppose you’ve got a project structure that looks something like this:

App1 depends on the StickyListHeaders library

App2 depends on the StickyListHeaders library

If you were to follow the Google’s user guide in setting up your projects, then you would create two projects, one for App1 and another for App2. The project directories for App1 and App2 would each contain a submodule that has the code from the StickyListHeaders library that each app needs to build successfully.

It doesn’t take make to see the unfortunate features of this setup. First off, you have to have copies of a library for every app that depends on it.

If you frequently make changes to that library, you’re going to want it to be versioned, and you probably want to have the library in a repository that’s separate from your app so that you can checkout the library and reuse it for any app that needs it. Since the library module is a subdirectory within the project, you’ll have to use git submodules to achieve this. As others have noted, however, git submodules aren’t really that great.

So, if you follow the Google way, you’re sort of¹ forced to have copies of your libraries for all of your apps that depend on those libraries and if you change those libraries often, then you might have to start using git submodules.²

It turns out there’s a better way to manage multiple projects in Android Studio. The trick is to create separate Android Studio projects for your libraries and to tell gradle that the module for the library that your app depends on is located in the library’s project directory. If you wanted to use this method with the project structure I’ve described above, you would do the following:

The 4th step is the hard part, so that’s the only step that I’ll describe in detail. You can reference modules that are external to your project’s directory by adding a project statement in your settings.gradle file and by setting the projectDir property on the ProjectDescriptor object that’s returned by that project statement: 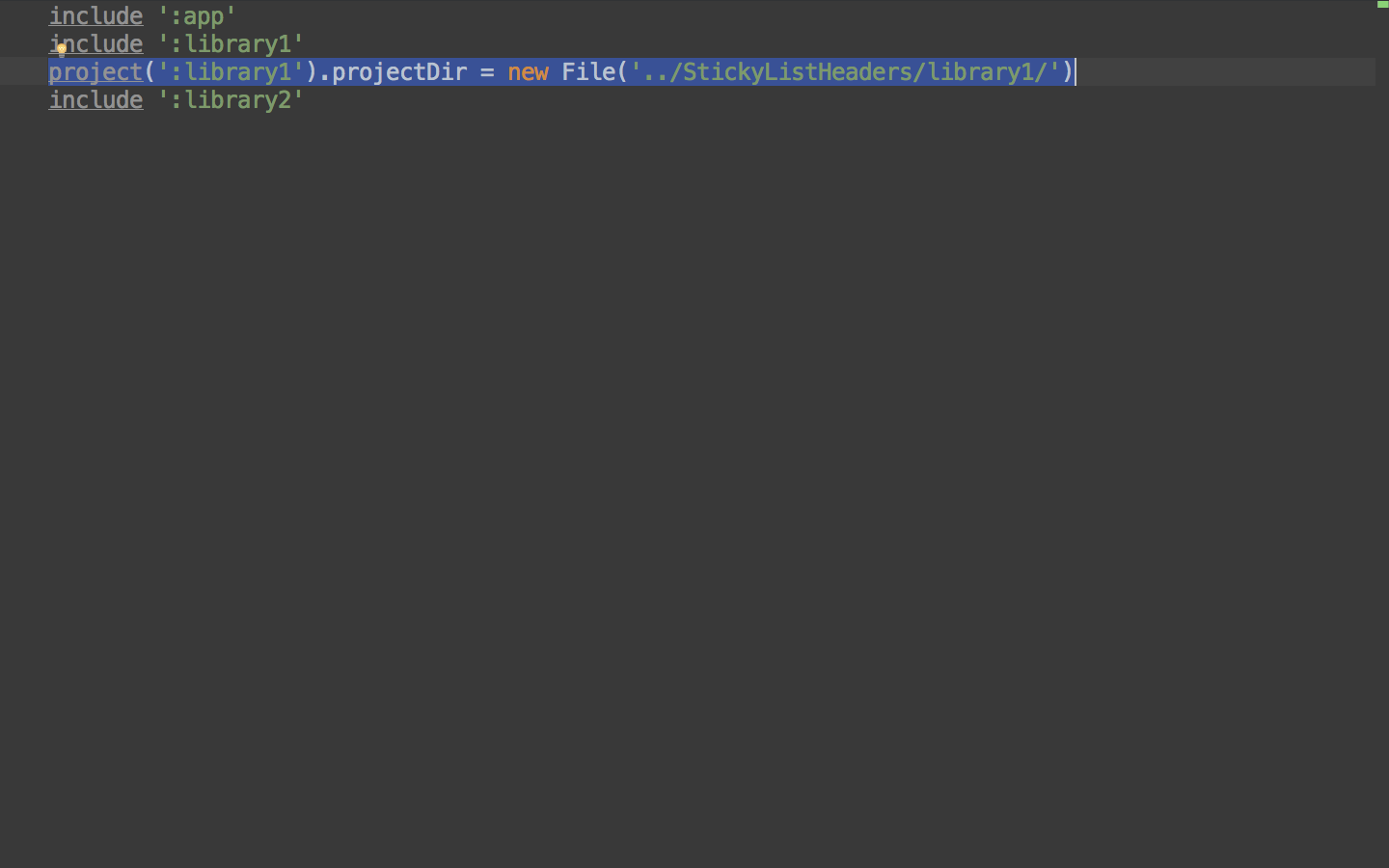 If you’ve done this correctly, you’ll notice that the modules referenced by your project will show up in the project navigator, even if those modules are external to the project directory: 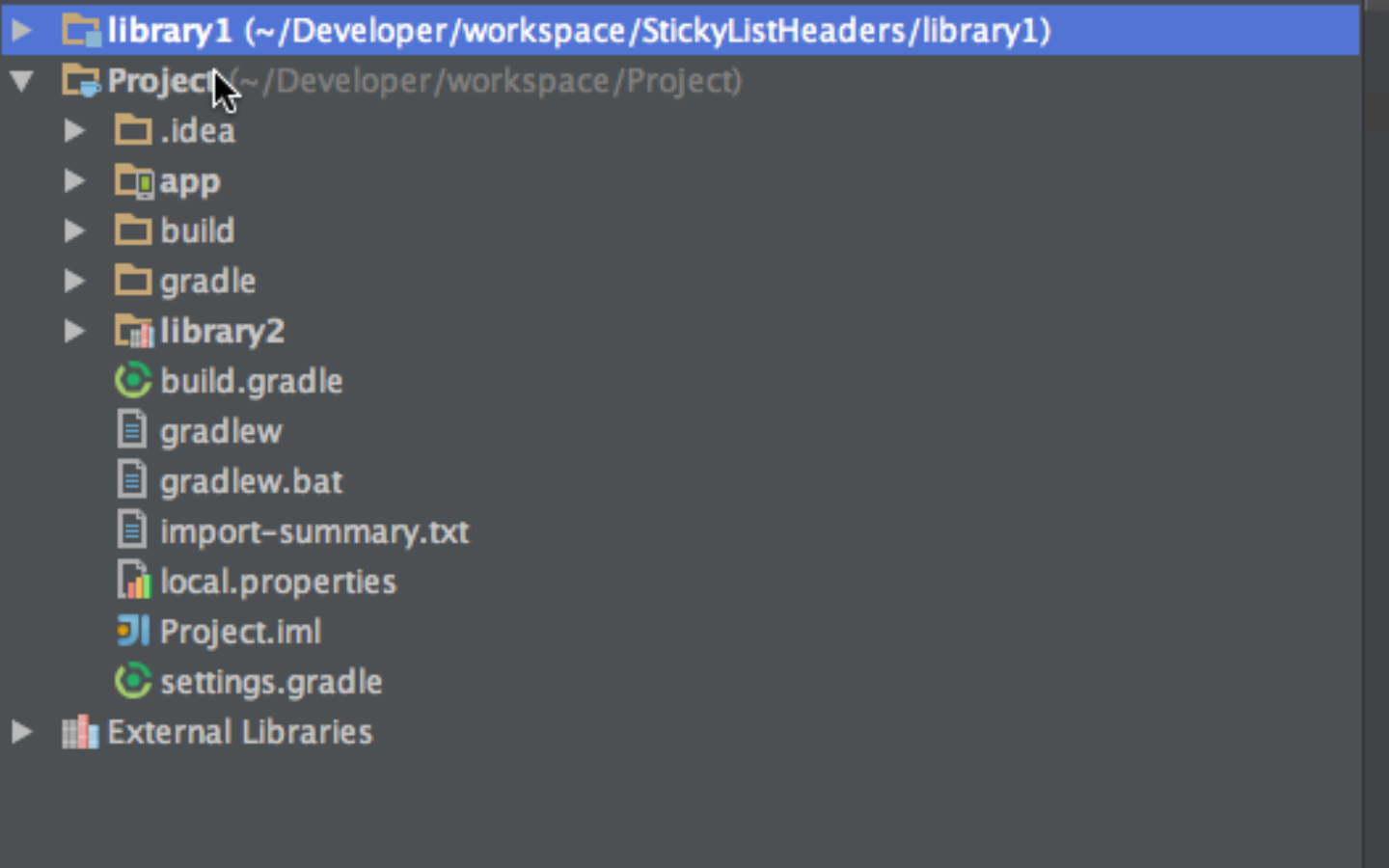 This way of setting up multiple projects avoids the difficulties that plague Google’s recommended configuration. Because we are referencing a module that is outside of the project directory we don’t have to make extra copies of the library module for every app that depends on it and we can version our libraries without any sort of git submodule nonsense.

Unfortunately, this other way of setting up multiple projects is very difficult to find. Obviously, its not something you’ll figure out from looking at Google’s guide, and at this point, there’s no way to configure your projects in this way by using the UI of Android Studio. I’m hoping that’ll change by the time Android Studio hits 1.0

If you’ve got any concerns with this setup or if you have a better alternative, I’d love to hear it!