My first app was terrible. It was so terrible, in fact, that I removed it from the store and I don’t even bother listing it on my resume’ anymore. That app wouldn’t have been so terrible if I knew a few things about Android development before I wrote it.

Here’s a list of things to keep in mind as you’re writing your first Android apps. These lessons are derived from actual mistakes that I made in the source code of my first app, mistakes that I’ll be showing below. Keeping these things in mind will help you write an app that you can be a little prouder of.

Of course, if you’re doing your job right as a student of Android development, you’ll probably hate your app later regardless. As @codestandards says,

If the code you wrote a year ago doesn't seem bad to you, you're probably not learning enough.

If you’re an experienced Java developer, items 1, 2, and 5 probably won’t be interesting to you. Items 3 and 4, on the other hand, might show you some cool stuff you can do with Android Studio that you might not have known about, even if you’ve never been guilty of making the mistakes I demo in those items.

1. Don’t have static references to Contexts

This might seem like an impossible mistake for anyone to make. Its not. I made this mistake. I’ve seen others make this mistake, and I’ve interviewed people who weren’t very quick at figuring out why this is a mistake in the first place. Don’t do this. Its a n00b move.

If MeTrackerStore keeps a reference to the Activity passed into its constructor, the Activity will never be garbage collected. (Unless the static variable is reassigned to a different Activity.) This is because mMeTrackerStore is static, and the memory for static variables isn’t reclaimed until the process in which the application is running quits. If you find yourself tempted to do this, there’s probably something seriously wrong with your code. Find help. Maybe looking at Google’s Udacity course on “Android Development for Beginners” will help you out.

Note: Technically, you can hold a static reference to an application Context without causing a memory leak, but I wouldn’t recommend that you do that either.

2. Beware of “implicit references” to objects whose lifecycle you do not control

There’s multiple problems with this code. I’m only going to focus on one of those problems. In Java, (non-static) inner classes have an implicit reference to the instances of the class that encloses them.

The GetLatAndLongAndUpdateMapCameraAsyncTask has an implicit reference to a Fragment, an object whose lifecycle we don’t control. The Android SDK is responsible for creating and destroying Fragments appropriately and if GetLatAndLongAndUpdateCameraAsyncTask can’t be garbage collected because its still executing, the DefineGeofenceFragment that it implicitly refers to will also be kept from being garbage collected.

There’s a great Google IO video that explains why this sort of thing happens.

3. Make Android Studio work for You

This snippet is what Android Studio generated when I used the “Generate Getter” code completion in Android Studio. The getter keeps the ’m’ prefixed to the instance variable and uses it when generating a getter method name. This is not ideal. 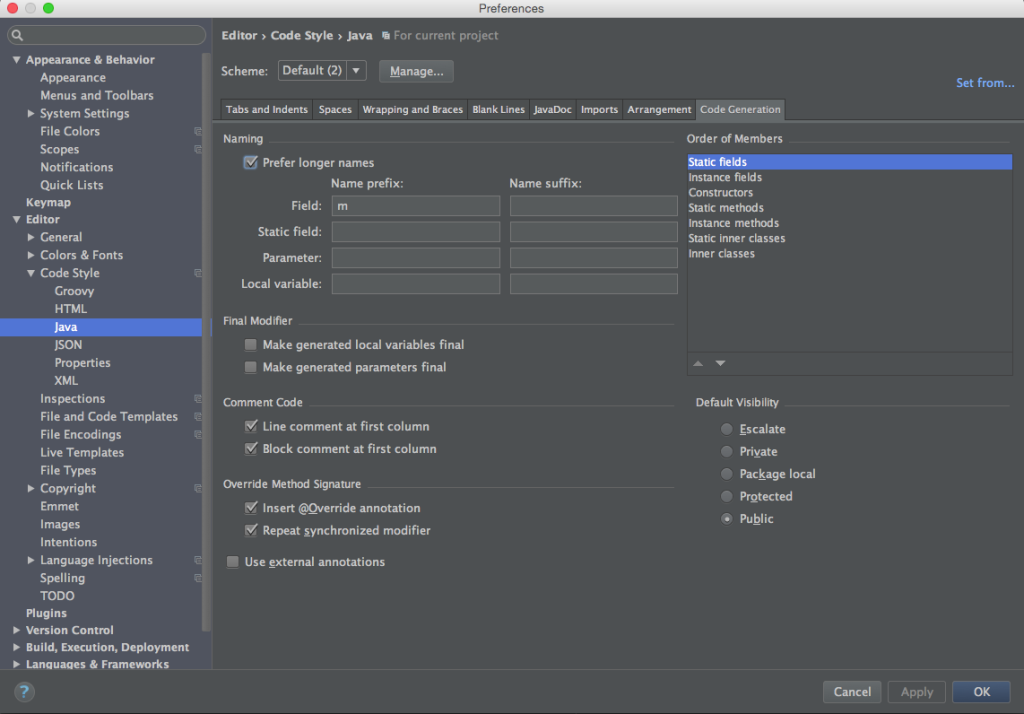 Android Studio can do a lot more than that too. Learning shortcuts and learning about live templates are good places to start.

4. Methods should do one thing

There’s a method in one of the classes that I wrote that’s over 100 lines long. Such methods are hard to read, modify, and reuse. Try to write methods that only do one thing. Typically, this means that you should be suspicious of methods that are over 20 lines long. Here you can recruit Android Studio to help you spot problematic methods:

5. Learn from other people who are smarter and more experienced than you.

This might sound trivial, but its a mistake that I made when I wrote my first app.

When you’re writing an app you’re going to make mistakes. Other people have already made those mistakes. Learn from those people. You’re wasting your time if you repeat the avoidable mistakes of others. I wasted a ton of time on my first app making mistakes that I could have avoided if I just spent a little more time learning from experienced software developers.

Read Pragmatic Programmer. Then read Effective Java. These two books will help you avoid making common mistakes that we make as novice developers. After you done with those books, keep looking for smart people to learn from.

When you’re writing an app, you’re probably going to encounter problems that smarter and more experienced people have already solved. Moreover, a lot of these solutions are available as open source libraries. Take advantage of them.

In my first app, I wrote code that provided functionality that’s already provided by libraries. Some of those libraries are standard java ones. Others are third-party libraries like Retrofit and Picasso. If you’re not sure what libraries you should be using you can do three things:

Writing good Android apps can be very difficult. Don’t make it harder on yourself by repeating the mistakes I made. If you found a mistake in what I’ve written, please let me know in the comments. (Misleading comments are worse than no comments at all.) If you think this’ll be useful for a new developer, share it. Save them some headache.

My Response to Hannes Dorfmann on "the Circular Dependency Problem"